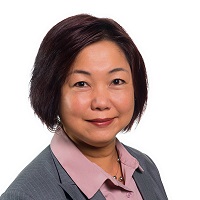 Shirley Chua-Tan is running for the Yukon NDP because she is passionate about health care. She wants to make certain everyone has access to the quality health services they need in a timely way. She also wants a government that invests in people, especially children. By providing quality education choices and empowering people, Shirley believes government can help build a stronger society.

As a business person, Shirley is concerned that the Yukon Party government has mismanaged the surplus it inherited. From $85 million 14 years ago, all that the Yukon Party has left us is $1.2 million. Shirley wants to be part of the Yukon NDP team that will return responsible government to the Yukon with accountable spending, support for local businesses, creative ideas to boost our economy, and respectful relationships with First Nations and all other governments.

Shirley graduated with a Diploma in Chemical Process Technology from Singapore Polytechnic. Before moving to Canada, she was a sales consultant for a Fortune 500 company in health services. Her work required travel and extensive work with business partners in Malaysia, Philippines, China, Indonesia, Taiwan, and the United States. Shirley’s efforts earned her the highest Team Asia award for the Asia Pacific region.

Shirley and her family of five immigrated to British Columbia in 2000. She become a licensed mutual fund and insurance agent working for a multinational financial services company. When Shirley left that company, she was a regional manager.

In 2010, Shirley and her family moved to Whitehorse. Shirley realized an opportunity in Whitehorse for a real estate agent who speaks four languages and understands the needs of working people and new immigrants to the Yukon. Shirley’s focus is people first and that principle has helped her be a top sale volume agent year after year.

Shirley’s extensive community volunteerism includes Vice President of Autism Yukon (current), Teegathaohzheh board member, Yukon Council of disAbility, Squash Yukon, and Yukon Sourdough Rendezvous (she was the 2015 Rendezvous Queen). Shirley is an avid squash player and was a Team Yukon member at the 2013 Canada Masters Open.