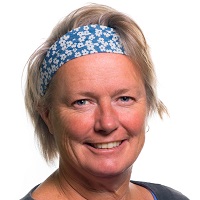 Renewable energy expert, artist, writer and longtime Kluane resident Sally Wright says that the NDP's belief that Yukon needs a robust green energy future resonates with her views about energy and positive community development. Wright is excited to roll up her sleeves and work alongside the Yukon NDP’s strong team of candidates and sitting MLAs to develop renewable energy infrastructure that creates jobs and protects the environment.

By running for office, Wright wants to promote the creation of green jobs, sustainable economic development and energy security for the territory. Like many of her neighbours near her home at Silver City in Kluane Country, Wright wants to continue enjoying the benefits of a community steeped in nature – like access to an unpolluted backcountry, healthy wildlife, and clean drinking water. However, she also recognizes that the Yukon government needs to make important decisions about its energy future.

Wright points to the Yukon NDP’s support for green businesses that need help navigating the Yukon government, such as a company developing aquaponics technology to grow local produce that was having problems getting a government regulatory exemption, as evidence that the party can make good on its commitment to sustainable development. Meanwhile, its support for a stronger Yukon renewable energy industry offers an alternative for skilled trades workers who have felt the squeeze from the downturn in the mining industry.

“Yukoners shouldn’t have to choose between the environment and the economy. Sustainable renewable energy infrastructure creates jobs and harnesses our natural resources while allowing us to continue enjoying the Yukon we know and love,” added Wright. “That’s the side I want to be on. I’m looking forward to meeting more of my neighbours and listening to them as I gear up for the fall election.”