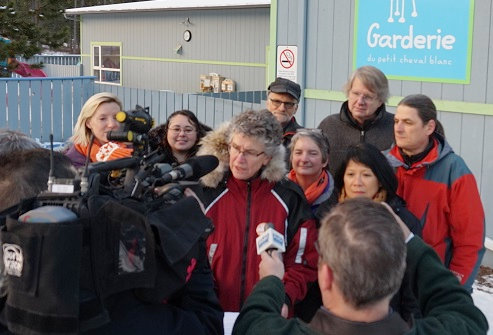 Yukon NDP leader Liz Hanson was joined by former NDP MP and Distinguished Visiting Professor at Ryerson University Olivia Chow today to announce the NDP’s childcare program, including a commitment to cut costs to families by 25% and deliver better and more services within their first mandate. The NDP plan will save a Yukon family over $2000 per family per child.

“Too many parents with young children feel left behind by the Yukon Party government – they’ve made many promises but have achieved very little in terms of results. The Liberals, meanwhile, have made hardly any promises on childcare at all.” said Hanson. “But we’ve heard it loud and clear – parents want action.”

The Yukon NDP plan is to deliver better and affordable childcare, and the first step will be to create a ministerial task force that will review a number of issues and make concrete recommendations. Part of its mandate will be to lay out a plan to reduce childcare costs by 25% in the territory within the NDP’s first term.

Chow has spearheaded childcare initiatives, as the official opposition critic responsible for the file. She spoke to the importance of childcare.

“Access to affordable childcare is important so parents can return to the workforce,” said Chow. “I have seen the desperation in parents’ eyes when their kids can’t get affordable childcare. I know the Yukon NDP has the experience, having had been in government for ten years, to deliver better childcare services for Yukon families.

According to the most recent statistics, there are no childcare spaces for 7 out of 10 Yukon children aged 0-12. The monthly median daycare rates are $739 for infants and $649 for preschoolers, per child. The NDP plan will save a Yukon family over $2000 per family per child.